Breastfeeding can play an especially important role in early-life nutrition. It can benefit children’s future school performance and economic prospects in later life, as well as the mother’s health.

Health authorities across the world endorse the World Health Organization’s (WHO) recommendation that newborns should where possible exclusively breastfeed from the first hour of life until six months of age, and thereafter receive safe and nutritious foods with continued breastfeeding up to two years of age or beyond.

This growth in sales was seen in all types of formula, including “standard” formula for infants (0-6 months), “follow-up” formula (7-12 months), toddler milks (13-36 months), and so-called “specialised” formulas. So more children from a wider range of age groups are consuming formula.

Rapid growth has occurred in many highly-populated countries, including the Middle East, north Africa, eastern Europe, central Asia, and parts of Latin America. The most remarkable growth has been in east and south-east Asia. China, in particular, accounted for only 14% of global formula sales in 2005 – but now accounts for 33% of all sales.

In south Asia and west and central Africa, the amount sold to each customer remains low and show no signs of growth. In Europe and North America, although per customer sales volumes remain high, they plateaued or slightly decreased between 2005-2019.

Infant formula sales have doubled between 2005 and 2019. 279photo Studio/ Shutterstock

Behind the sales ‘boom’

There are medical reasons for using safe and adequate breastmilk substitutes. And some women find continuing breastfeeding difficult depending on their circumstances, and may use formula as an alternative or complement to breastfeeding. Our study also shows decisions and practices around formula use can be strongly shaped by wider societal forces, such as commercial marketing, rather than individual choice.

Millions of women worldwide also lack adequate paid maternity leave and social protection. This means the decision to formula feed may only be done out of necessity, to avoid losing employment and income. We also know that many hospitals and healthcare settings aren’t equipped to help women establish breastfeeding, with few maternal and newborn care facilities worldwide meeting standards of care for breastfeeding mothers and newborns.

Commercial factors are also important. Just five companies control 57% of the global formula milk industry, worth US$56.6 billion (£42.5 billion) The industry spends an estimated US$5 billion on marketing every year, which powerfully shapes social norms about feeding babies and children.

Marketing messages can portray formula as modern, scientific and comparable or superior to breastmilk. The growth of social media enables companies to target mothers with personalised product offerings and ads. 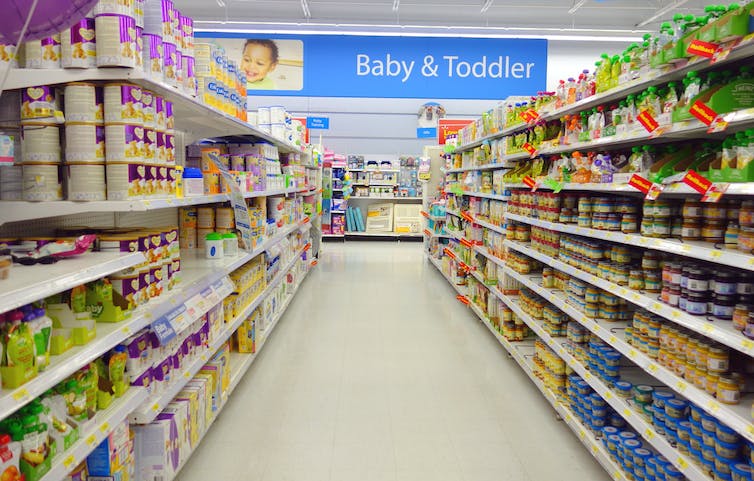 Companies also cross-promote their entire product range of follow-up and toddler milks by using packing and labelling that resembles standard infant formula. This allows companies to get around the stricter prohibitions on infant formula marketing.

Marketing regulations are also important. The fact that formula sales are booming in China but have flat-lined at low levels in India partly reflects contrasting regulatory environments – with regulations on marketing being stricter and more comprehensive in India.

Despite an international code to stop aggressive and inappropriate marketing of breast-milk substitutes, most governments haven’t fully incorporated it into law. And even when laws exist, marketing violations by formula companies often go unpunished. The formula industry has also been able to lobby against any strengthening of regulation, partly by promoting their own – much weaker – corporate policies on marketing.

Breastmilk and breastfeeding where it is possible has numerous advantages over formula and bottle feeding – which is why the growth of formula sales is concerning.

Rising consumption of formula milk by toddlers and young children is also a worry, as these products are often ultra-processed, expensive, loaded with sugar and can introduce poor dietary habits. Their increased use could further contribute to increases of overweight and obese children globally.

Formula isn’t a sterile product and can be dangerous when prepared in unhygienic conditions, or when over-diluted or over-concentrated. It lacks the immune-boosting and other important elements of breastmilk, further increasing the risk of malnutrition and infectious illness. As a result, universal breastfeeding in place of formula use could prevent an estimated 823,000 child deaths every year (mainly in low- and middle-income countries), including 595,000 deaths from diarrhoea and pneumonia, and an estimated 20,000 maternal deaths from breast cancer (mainly in high income countries).

The global surge in formula sales is clearly a problem for global health. Given the power of the corporate milk formula industry to influence behaviour and understanding, more needs to be done to ensure that all mothers and children are protected from inappropriate promotion, and that they are enabled to breastfeed as long as they want to. This means strengthening laws that ban harmful marketing practices, expanding access to paid maternity leave, and ensuring that all healthcare facilities meet global standards.

This article is republished from The Conversation under a Creative Commons license. Read the original article.